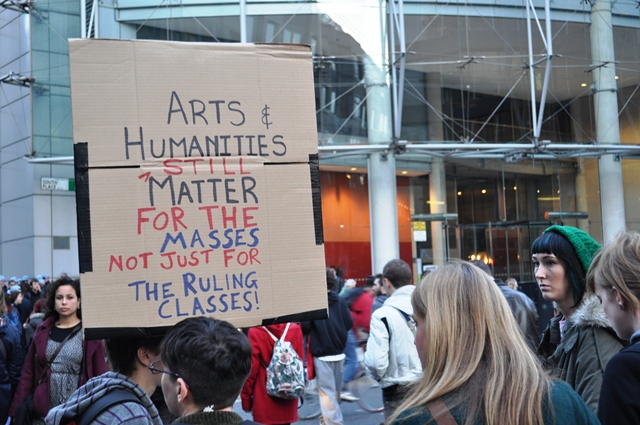 This year’s presidential theme, #States of Insecurity, pressed itself upon me late last year. It urges us to reflect on how our intellectual, artistic, and pedagogical work helps us confront the grave issues facing our profession(s). What strategies, it asks, do the humanities offer for navigating our current crises: political volatility, fluctuating financial markets, fear-mongering media, and increasingly hateful acts and rhetoric that contribute to a general sense of malaise?

I had originally anticipated my presidential term might highlight resistance and activism, exploring ways that humanists might use the skills they have developed in verbal and written
expression, performance and visual cultures, and digital and analog formats to support the values of the liberal arts and invert, subvert, parody, and redo some of the more nefarious happenings in the public sphere. I was hopeful we might enact solidarity and even joy in support of our disenfranchised students and colleagues as we strengthened our educational mission.

Suddenly, however, it became clear that the challenges facing education in the United States were overwhelming our profession. Resistance and activism, though certainly vital, did not seem enough. With dizzying speed, executive orders announced travel bans. Congress appointed Betsy DeVos, an open critic of public schools, as secretary of education. DACA (deferred action for childhood arrivals) students were at risk of deportation. The White House threatened to defund the National Endowment for the Humanities, the National Endowment for the Arts, and other cultural institutions. Title VI and Hays-Fulbright came under attack, limiting support for language instruction in the United States and abroad. The speed and reach of the hostile actions set off alarms for those of us in the humanities. Gone was the time for analysis, reflection, and discussion so vital to our understanding of critical thinking and decision making. The tables had turned, and the WE, those I had imagined would intervene and redirect the conversation toward more democratic and egalitarian practices, were the ones being parodied and undone.

Public opinion also shifted rapidly. In July, the Pew Research Center reported finding a “deep partisan divide” regarding the value of education (Fain). As I write, our educational system is being dismantled and defunded. Departments, as with Stony Brook University recently, are being collapsed into catchall administrative units to reduce the number of faculty and staff members. Watch lists target “liberal” professors, and reputable scholars are being maligned in the press. Our theories are being used against us. Those of us who had argued cogently that reality is complex and anything but natural and transparent are back in the trenches maintaining the primacy of facts. Advocates of freedom of expression are being slammed using free-speech arguments. The tensions and suspicions that currently plague our public sphere make themselves felt increasingly in our fields and professional practices. I, like many others, have started to police what I say and what I write.

As the new not-normal unfurled, however, it became clear that resistance and activism, while they might not be enough, remained more important than ever. The women’s march and the PEN rally called attention to how critical it is to have people on the streets. Activist groups made common cause with civil rights organizations and journalists to continue to defend DACA. Protestors clogged local airports to impede the travel ban. Nearly 150,000 people have contacted their congressional representatives to defend the NEH. Organizations such as the MLA have been on the front lines of many of these struggles.

#States of Insecurity, then, asks us to consider the very real threats to our educational system even as we use the tools we have—organizing, critique, protest, collective action, and humor—to push back. The hashtag in the title is an emblem of the networked and mediated nature of both the menaces and our responses.

A hashtag is a metadata symbol that helps find, name, and organize materials by topic, such as states of insecurity. The # clusters some of the many possible topics in the convention into a recognizable theme. Are states of security or security states the hoped-for opposite of states of insecurity or the other side of the same subjugation? The hashtag suggests too that this state pertains to a category of similar events—neither the first nor the last in a long series. Indigenous peoples, as well as many racial, gender, national, and religious minorities, have long lived in states of insecurity. The hashtag can also communicate one’s feelings about something: #makingprogress, #depressed. The metadata tag on social media automatically creates an ad hoc community or affinity group. As a product of social media, it captures the speed with which the debates and critiques both outside and inside our organization have gone viral.

Ideally there will be as many different ways of thinking through #States of Insecurity at this year’s MLA convention as there are ideas on how best to confront these states. More than three hundred sessions (or more than a third of the total number of sessions) have asked to be part of the presidential theme. The Presidential Plenary brings together scholars long committed to activism—including Angela Davis, Cathy Davidson, Judith Butler, the Mayan scholar Juan López Intzín, and Anthony Romero, head of the American Civil Liberties Union—to discuss strategies for survival. The linked sessions, Rights under Repression and States of Insecurity: Accepting Vulnerability, Permeability, and Instability, further explore the theme. Gayatri Chakravorty Spivak will receive the Lifetime Scholarly Achievement Award.

The MLA is committed to advocating for the centrality of the humanities not only in our educational systems but also in society. The association’s new advocacy site, the MLA Action Network, will enable scholars to keep up-to-date and respond to threats to free speech, net neutrality, and health care—all of which affect those working in our fields. Because of its size and standing, the MLA can make a difference and help its members intervene in the many states of insecurity we now face. Now is the time not only to assess the dangers but, as a WE, to fight them collectively. I’m looking forward to seeing you all in January!