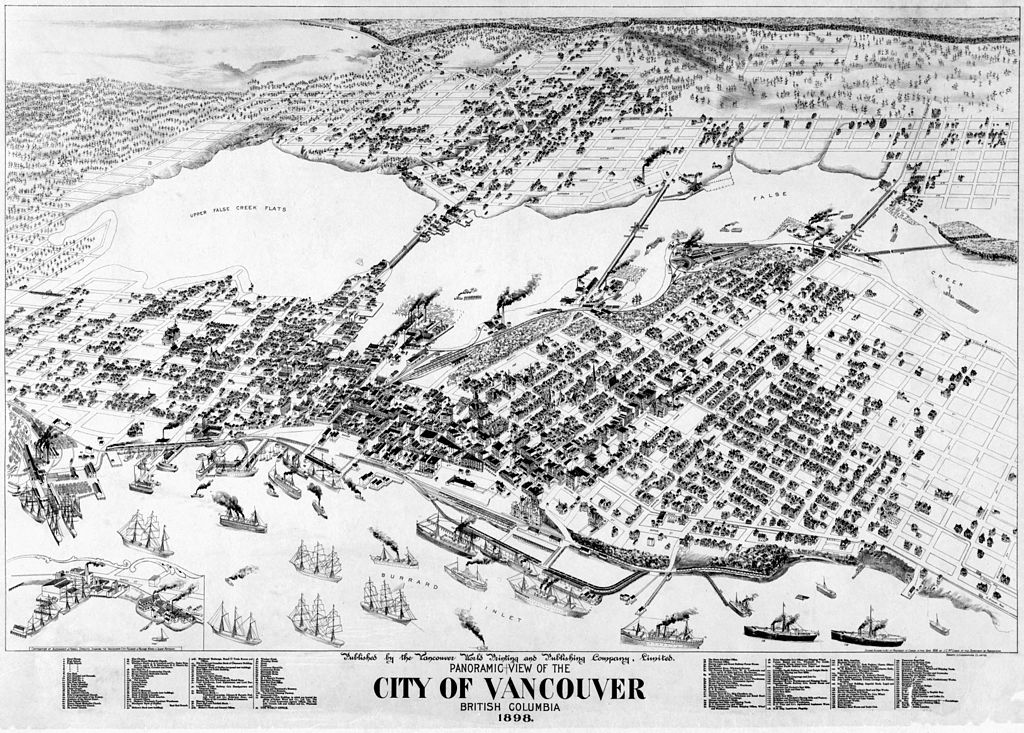 Negotiating Sites of Memory in Vancouver

In January 2015, the MLA will meet for the first time in Vancouver, named in 1886 after a British naval captain, George Vancouver, who explored the area in June 1792. Names are important in the city’s complex history as a colonized territory—and in its other, intertwined though much longer history as a place inhabited by many indigenous peoples. George Vancouver, who named over four hundred places on the Northwest Coast, was adroit at using English names to stake symbolic claims on waters and lands important to Britain’s mercantile interests. But he didn’t understand and perceived no need to learn the language of the native inhabitants of the place he would name Burrard Inlet, after an English friend. When these inhabitants, who called themselves Tsleil-Waututh, or “People of the Inlet,”1 canoed down the waterway to meet his boat, they brought several cooked fish, and Vancouver gave them some pieces of iron in return. But, as revealed in his journal entry, he misinterpreted their two collective speech acts in a way that did not bode well for subsequent efforts at communication. Both times that they paddled forward to talk, Vancouver thought they were engaging in “consultations” among themselves on matters that remained a “profound secret to us.” He found “[t]his sort of conduct” suspicious and advised that it should “ever be regarded with a watchful eye” (3: 190). He did not imagine that the natives were making ceremonial speeches of welcome to a group of strangers—as they had done for millennia according to customs that are still remembered today.

Traveling between established seasonal encampments in a rich ecological system that was a crossroads for trade, the native peoples of the Vancouver area communicated in many languages and across many borders. Were some of those languages, now classified as dialects, mutually intelligible in the precontact past? It would be tempting but reductive to explain the difficulty of answering such a question in terms of the distinction that the historian Pierre Nora draws between cultures with customary memories, which he associates with orality and embodied habits, and cultures with history, which he associates with critical reason, the capacity for nostalgia, and, above all, historiography in its root sense: the writing of history. His distinction between memory and history is challenged by the past and present language situation of Vancouver, as are two other distinctions important both to the city’s history and to my presidential theme, Negotiating Sites of Memory: the distinctions between ancient and modern and between colonial and postcolonial. There are obviously contexts in which it’s meaningful to oppose these terms as names for earlier and later periods, but the notion of a linear succession of periods in a Newtonian uniform flow of time becomes an obstacle to thought about sites with histories that have been, and continue to be, sites of contested memory and interpretation.

The aboriginal peoples of Canada, Peter Kulchyski argues in Like the Sound of a Drum, had ancient modes of writing on the land and on the body as well as modes of communicating aurally across space by drum. These semiotic systems are, however, not only ancient but also modern; Kulchyski shows how they are being “reconfigured and redeployed” in ongoing negotiations among parties with competing understandings of modernity and private property (17). The parties don’t come to the table with the rough parity usually required for successful negotiations. One sign of the asymmetry is the endangered status of all of the more than thirty indigenous languages of British Columbia (“First Nations Languages Program”). The people who welcomed Vancouver to their inlet spoke a language now identified as Hən̓q̓əmin̓əm̓, one of three closely related tongues grouped under the English term Halkomelem and also categorized, more generally, as a version of Central Coast Salish. Today, there are few speakers who describe themselves as fluent in Hən̓q̓əmin̓əm̓, and there are none at all in the Tsleil-Waututh community (“Hul’q’umi’num'”). Yet the number of indigenous language learners in Vancouver is growing, with support from the University of British Columbia’s First Nations Languages Program and community Web sites, such as Qwiqwel.com, which highlights the Hən̓q̓əmin̓əm̓ word qwiqwel, “to make a speech.”

Making speeches, listening to them, and sometimes interrupting, translating, interpreting, and debating them are activities that MLA members regularly practice as well as reflect on. These are also the activities that I hoped my colleagues would analyze and illuminate under the rubric Negotiating Sites of Memory. As I have thought more deeply about this theme during a summer filled with relentlessly terrible news about failed negotiations and proliferating acts of violence in many parts of the world, I have had moments of despair about the theme’s conceptual and ethical complexities. As a valuable alternative to war, negotiation may in some circumstances work as “a discussion or process of treaty with another (or others) aimed at reaching an agreement about a particular issue [or] problem” (def. 2), but negotiation can in other circumstances signify “manipulation” designed to get around an obstacle (def. 4). Negotiators may be at odds among themselves, and the fruit of a long negotiation may at times involve no more than an innovative phrase acknowledging that a problem exists in the eyes of both parties. A striking example of such a modest but still significant result of a negotiation over a site of memory occurred in June when the Vancouver City Council voted unanimously to acknowledge that the modern city occupies the “unceded traditional territory” of three indigenous peoples who have small land “reserves” within the city’s borders: the Musqueam, the Squamish, and the Tsleil-Waututh (Austin). “Unceded territory”: it’s a thought-provoking phrase both for citizens of Vancouver and for those who visit from other countries that have appropriated the lands of indigenous peoples and see those appropriations as events belonging to the past. “Unceded territories” puts indigenous people’s claims to their lands squarely in the present while also implying that negotiations should continue in the future.

Among the more than two hundred sessions that MLA members have organized in connection with the presidential theme, many address bracing questions about the concept of negotiation and about the modern academic field of memory studies. The roundtable “Transnational Memories: Sites, Knots, and Methods,” for example, questions “sites of memory” as an “assumed framework” for a field that has been “linked from the outset to national memory cultures, institutions, and sites.” Other MLA sessions, however, dissociate sites of memory from physical monuments, museums, and forms of commemoration approved (and often funded) by modern nation-states. There will be sessions on the print form of the edition, silent films, sixteenth-century composting practices, French Renaissance menus, troubadour poems, medieval Iberia, the early modern erotic body, the human brain, and queer archives—all considered sites of memory from various theoretical perspectives. There will be discussions of geographic sites of contested memory and analyses of texts that reconstruct the memories of slaves, prisoners, and poets. Many of the sessions conceived under the rubric of the presidential theme engage with what Michael Rothberg has analyzed as “multidirectional memory” that is “subject to ongoing negotiation, cross-referencing, and borrowing” (3). Memory is also subject, of course, to forgetting. The ancient Greeks figured forgetfulness, Lemosyne, as the twin sister of memory, Mnemosyne, and both goddesses will be invoked at the upcoming convention. I hope you will be able to attend it. If you do and are not a Canadian citizen, please don’t forget your passport. Borders between sovereign states, even ones that have friendly relations, are serious social constructions.

Kulchyski, Peter. Like the Sound of a Drum: Aboriginal Cultural Politics in Denendeh and Nunavut. Manitoba: U of Manitoba P, 2005. Print.

Rothberg, Michael. Multidirectional Memory: Remembering the Holocaust in the Age of Decolonization. Stanford: Stanford UP, 2009. Print.