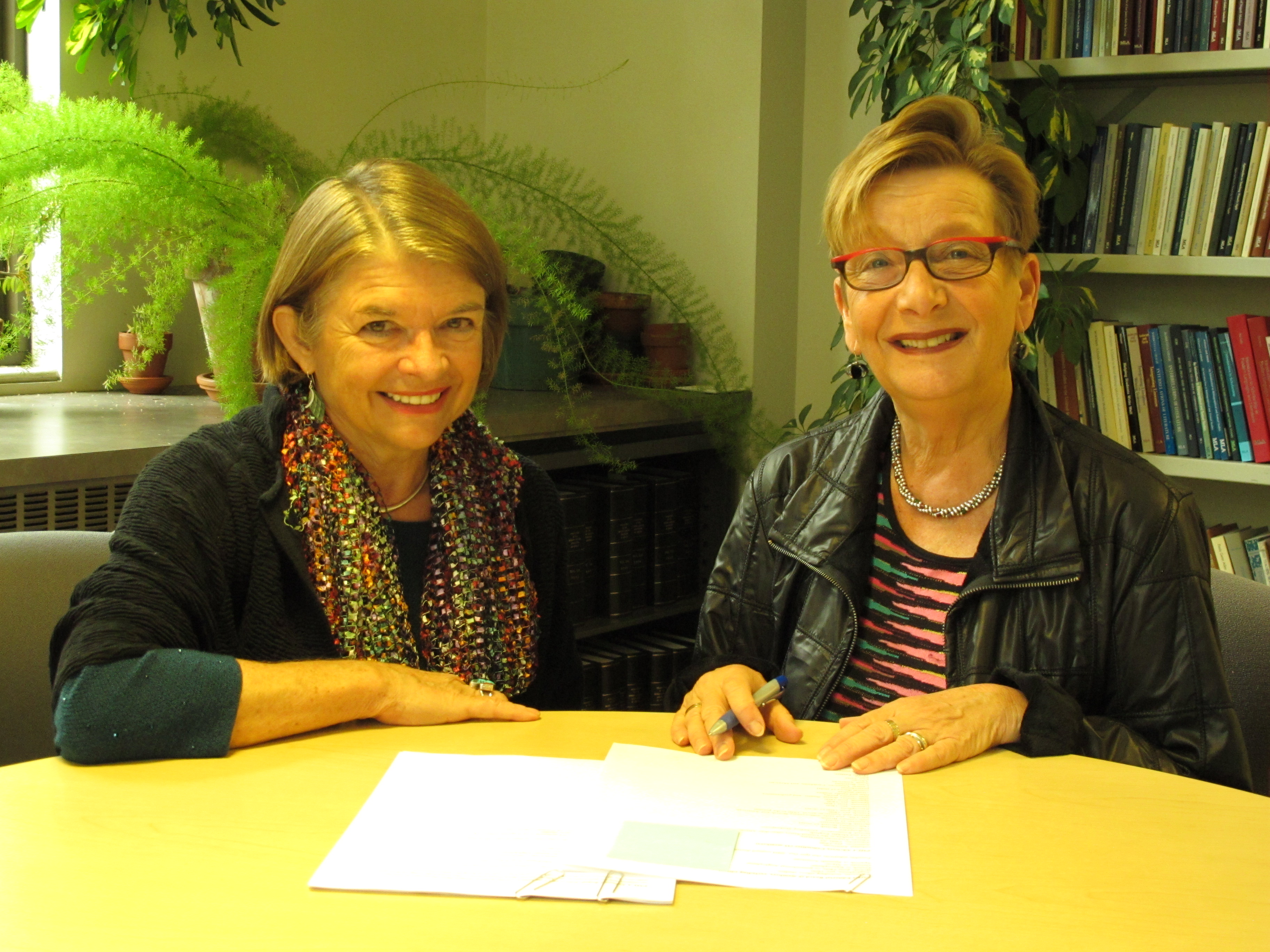 MLA President Marianne Hirsch and First Vice President Margaret Ferguson have collaborated on this column to discuss proposed revisions to the association’s divisions and discussion groups.

Hirsch: It may be because we belong to the same feminist generation that I did not hesitate to invite Margie Ferguson to cochair the Working Group on the MLA’s Divisions and Discussion Groups as soon as she was elected Second Vice President. It was clear to me that the work of reviewing the association’s traditional structures of knowledge had to be undertaken collaboratively and that we would need to invent a process of extensive and inclusive consultation—one that would not only allow a large number of members to participate but that would still move forward expeditiously. Together, I hoped, with the advice of the working group, the Executive Council, and the Program Committee, and aided by the association’s new collaborative digital platform MLA Commons, we could devise such a process and imagine a renewed structure (see groupsdiscussion.mla.hcommons.org).

I’ve not been able to shake my collaboration habit. The addiction dates back to my first years as an assistant professor, and I venture to say that it has sustained me through several decades of academic work. I’ve cochaired academic programs, centers, institutes, and committees; coedited books and journal issues; cowritten articles and a scholarly book—some of these before the advantage of e-mail, Dropbox, and Google Docs. It’s not just that I like writing and thinking in conversation with others, the stimulation and surprise of it, the security of sharing responsibility. In fact, collaboration is never without conflict: it can be agonistic and profoundly uncomfortable. Rather, it’s that, in the emergence of feminist political and scholarly work in the 1970s and 1980s, when I first entered the academy, problems benefited from being approached from multiple, interdisciplinary angles, from being argued, challenged, and debated. I hoped that this long-term experience with the practice of feminist collaboration and conflict would prove useful in the task of reviewing the MLA’s intellectual structures.

Ferguson: “Conflict” and “collaboration,” along with “conversation,” “commons,” and “compromise,” belong to a large family of English words indebted to the Latin root “co,” meaning “together.” The best experiences I’ve had of collaborative work—and I’ve had many, resembling Marianne’s—have made time and space for conflicts to emerge. The task is to discern which ways of practicing conflict are crucial for the health of a collaborative project and which might become destructive. Marianne and I both recognize the necessity of disagreement to the immensely complicated collaborative task we have invited all MLA members—that’s a group of nearly 28,000—to participate in this fall. When Marianne asked me to cochair the working group with her, I remember muttering phrases like “Herculean labor,” “Borgesian taxonomies,” and “Kafkaesque story of metamorphosis.” As I began to learn more about the groups that wanted the association’s elected officers to respond to their persistent calls for structural change, however, and as I studied a list of current divisions and discussion groups that I (along with many MLA members, I suspect) had never looked at carefully, I came to see this revision project as urgent.

What I learned made me think in new ways about a collaborative process of revision. How could it acknowledge new fields of scholarship and teaching while respecting long-established groups? The answer to this question is not easy, and we are not going to arrive at even a compromise version of it without robust debate that moves many of us out of our comfort zones by asking us to think about the profession as a changing whole greater than the sum of its new and old disciplinary parts.

Moving beyond our disciplinary “homes” involves taking a step back from the important question of how many guaranteed convention sessions a given area of scholarly inquiry and teaching will retain—or acquire—under the proposed revision plan. Although we agree that the real estate issue is important, if it becomes the dominant issue, then it will be impossible for a truly collaborative decision-making process to occur. Why? Because the draft proposal aims to make qualitative as well as quantitative changes to the map of our evolving field represented (imperfectly) on the current lists of divisions and discussion groups (www.mla.org/divisions_groups). There were moments in the meetings of the working group when I thought we were all in a race like the one in Zeno’s famous paradox of Achilles and the tortoise, a paradox designed to prove that all motion is an illusion. And there were moments when most of us wanted a more sweeping revision than the incremental one we eventually posted on the Commons. We all agreed, however, that no merely arithmetic logic can guide us in reconceiving a structure that operates according to vastly different scales of time, space, and disciplinary approach. The draft revision does not aim to standardize groups, although it does aim to encourage communication among those members who affiliate under a given group’s old, new, or revised name.

We are learning a great deal from the comment process—as much from objections to some of our proposals to amalgamate groups as from the demand for new field formations. The next version of the proposal will reflect this continuing collaborative education, which has been humbling, frustrating, and enlightening and which has deepened our awareness that no scheme for representing intellectual affinity groups in the MLA will solve the practical and theoretical problems attendant on the concept of representation.

Ferguson and Hirsch: Whom do we represent when we are elected to MLA committees or offices? Some of us are elected as faculty members or graduate students, as representatives of our regions or our subfields. Presidents are nominated, alternately, from “English” or “Languages Other Than English.” Professional allegiances and identities are profound, and we have learned to mobilize them strategically to defend our fields against administrative and legislative cutbacks. But we have found that a different logic motivates our work as officers of the MLA.

We began the review of the MLA divisions and discussion groups with the whole profession in mind. But our visions of the whole were partial, limited by our experience and expertise. Through multiple conversations with individuals and groups (and individuals speaking for groups), we have had our concepts of the MLA tested, expanded, corrected, and—in short—changed. The most extraordinary of the collectivities with whom we have conversed is the one still forming on the Commons in response to the proposal for a revised structure. On that site, “conversations” are multiple and occur in jazzy rhythms at different levels of generality. This unprecedented collaboration has already improved the draft that we posted in September and promises to continue to do so. Note that comments on this draft are open until 20 November. A revised version will be open for comment after the January convention.

The total number of sessions that can be held at any given convention is, of course, finite—approximately eight hundred. But the intellectual range and quality of sessions can’t be measured by an additive logic. Those who plan guaranteed sessions—and who therefore don’t have to compete for convention space—have an opportunity every year to think about topics that might interest MLA members outside as well as inside their own knowledge territories. If we want to renew our fields by considering them as parts of a larger whole that cannot be found at specialized conferences, we need to work together in creative ways and check the tendency to compete for turf. The exciting collaborative sessions at the last few conventions provide a model for how members of new and old divisions and discussion groups can think and work together in ways that stress translation across and beneath the boundaries delineating what are now all too aptly named “divisions.”

The MLA Commons allows for collaboration to occur around specific areas of interest, informally, and to maintain smaller or larger field formations. The new three-year seminars provide additional opportunities for scholarly exchange. Groups will continue to be able to gain additional convention sessions by collaborating with other entities. And whatever new structure is adopted at the end of this process will be subject to regular self-study, review, and periodic renewal. This is, perhaps, the best that could come out of this round of collaborations—an evolving conversation about the shapes and scales of our fields and the stakes of our work.